A translanguaging space for interpreting trainees

When I discussed translanguaging in Tradiling recently, I left some questions hanging about the implications of this notion for interpreting training contexts. I am glad to have the opportunity to take up this issue again here.

A translanguaging approach to  language teaching raises the prospect of providing students with a ‘translanguaging space’ in courses, where they are encouraged to be both critical and creative in their use of language(s), and to be free to interchange freely between them, drawing on all their linguistic repertoires and resources.

This approach is part of a wider movement which challenges an out-dated and monolithic concept of languages as bounded entities, often ring-fenced by geo-national boundaries (specific countries, states, etc.) and ‘guarded’ by protectionist policies defending ‘language purity’. Such ideas, more often than not, are driven by political agendas, where language is conflated with nationalism, i.e. “within these walls we are one people with one shared culture and one shared language.” Yet, even at a sociolinguistic level this is patently not so. The language and cultural outlook of a farmer in the furthest reaches of the countryside is not the language and cultural outlook of city business operators, or politicians, or university professors. Furthermore, language changes over time, as people age and as they engage with different communities of practice (different fields), developing new linguistic repertoires.

The ideology of language purity and unity, however, persists. In the language classroom students are often supposed to eliminate ‘impurities’, ‘interference’ and ‘cross-contamination’ from any other linguistic resource they may have access to. Any variation is hunted down and exposed as a fault in the speaker, who appears at times to be accused of lacking self-control, or of being lazy and not concentrating sufficiently on the task in hand.

Yet, languages are resources and tools not only to communicate with, but also to reason with, to develop thoughts and ideas about the world with. There are no innate natural cognitive boundaries that exist, when we can draw on one or all of our resources for such purposes. However, we may be subject to boundaries imposed on us from outside.

Rigid boundaries could limit mental development. Bilingualism and multilingualism are thought to boost analogical reasoning, since code switching provides new affordances and synergies that use of a single code does not. According to this view, multilingualism is seen as a fluid activity, by the very nature of continual translation and comparative evaluation between languages. They are not isolated, modular entities, compartmentalised in some area of the brain and accessed through a ‘switch’ (a concept increasingly challenged, as in the epistemological connotations of ‘code switching’).

What does all this mean for interpreting studies? It is hard to imagine translanguaging as a useful resource in conference interpreting, where long stretches of monologue and monolingual speech are simultaneously translated in clearly defined contexts, and speeches are often researched and anticipated by the interpreter. It might, however, have some relevance in community and liaison interpreting, where the interlocutors share bilingualism and regularly interchange between languages and cultures, such as between Spanish and Catalan, where specific expressions or concepts could appear more apt in one language than in another.

In teaching and learning, we could provide spaces for students to explore their bilingualism, unimpeded by a rigid separation between languages. This would also allow students to explore cultural diversity and promote cognitive development in the liminal spaces between languages. The shape this space takes might be a classroom discussion or an online forum or a blog where students share ideas in a linguistically unbounded environment. There they might explore their social identities together and what they mean to them as future interpreters, where being a bilingual does not mean inhabiting a space of ‘two solitudes’ (two separate linguistic ‘realities’) but a unified, coherent and dynamic space, a linguistic world ‘sin límits’. 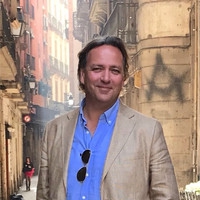 Alan Runcieman
Adjunct professor of interpreting and translation at UVic-UCC
Doctoral research at King's College, London, in the field of interpreting. I have been teaching Interpreting, language and intercultural communication for over 20 years.

Doctoral research at King's College, London, in the field of interpreting. I have been teaching Interpreting, language and intercultural communication for over 20 years.
View all posts by Alan Runcieman →
This entry was posted in Interpreting, Language learning. Bookmark the permalink.