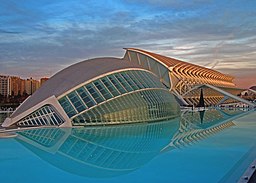 City  of Arts and Sciences, Valencia

The long-running debate about the relative value of the arts and sciences, or the humanities and the sciences, received an unexpected contribution last week. Apparently – I do not read the magazine so I can only infer this from the reply that has gone viral on social media – a Private Eye* columnist put the British Prime Minister’s alleged habit of bare-faced lying down to the fact that he studied Classics (Latin and Greek) at university.

The subsequent reader’s reply on the Private Eye letters page ranks as one of the great take-downs. While reaffirming the value of both sciences and humanities, Private Eye reader John Bothwell put Boris Johnson firmly in his place:

It’s unkind to use a classics degree as shorthand for the “bluster, lies and deceit” that characterise the current government, and I say that writing from my office in a university bioscience department.

The sciences can and will save your lives, especially in the face of climate change and current and future pandemics, but classics and the other humanities are going to be what makes those lives worth living afterwards.

The problem with Boris Johnson’s response to the pandemic isn’t that he studied classics: it’s that he’s a twat.

Congratulations to Mr Bothwell on his impeccable logic and glorious vulgarity.

Tradiling wishes a wonderful August to all our readers.

I’m a teacher living in Osona, Spain. I'm into tennis, dogs, and chickens. I’m also interested in translation and Moodle (well, digital tools for teaching, in general).
View all posts by Richard Samson →
This entry was posted in Fun. Bookmark the permalink.