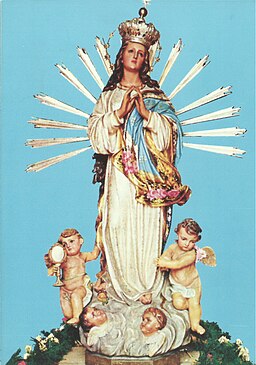 In a secular society, if like me you are not much of a believer, religious holidays can be curious occasions. In Spain people do not waste much time wondering about this kind of thing. “Just be glad it’s a holiday and enjoy yourself” seems to be the general attitude. In fact, many people will quite happily take a day off even though they have little idea what’s being celebrated.

Let me give you a couple of examples. La Segunda Pascua is often a holiday in Spain and so is La Inmaculada. But what is being celebrated on these days? Do you know? Why have a second Easter? (Was the first one not good enough?) What does immaculate mean anyway? And who was immaculate? (Answers at the foot of this text.)

If you enjoy such holidays, but have no idea what is being celebrated, then count yourself an ignorant party animal, with all due respect!

For the militant atheists, agnostics and multiculturalists among us, these are not mere trifles. In English, when somebody sneezes, the traditional response is “Bless you!”, which is short for “God bless you!”. But should you say this if you are not a believer? In this instance, English is uncharacteristically sparse in alternatives, though it seems that the German loan word Gesundheit!(Health!) is used in Canada and the USA.

Turning to the holiday period about to commence, how it is celebrated really is an issue. In Catalonia over recent years the tendency has been for unbridled accumulation: the more, the merrier. Thus, we have Father Christmas, Christmas trees, Christmas decorations and lights, presents on Christmas Eve, or at Epiphany, Christmas dinner, special food and drinks, a Tió, model nativity scenes, Midnight Mass, exchange of presents, the Three Kings in procession, and so on. The list is almost endless. If you don’t celebrate Christmas, it can all be a little overwhelming, to say the least.

But my question is this. How much should all these celebrations remain in the private sphere? How much should they be sponsored in the public arena? In the UK and in the USA, for example, traditional school nativity plays are now often pushed aside. In our multicultural, secular society, modern themes are favoured for end-of-term drama productions. You might argue that such moves undermine traditional culture. Others would say that it is fine for people to do just as they wish in like-minded groups, but in inclusive secular contexts respect for difference should be maintained.

That is how I see things too.

I do not approve of secular institutions promoting confessional activities, particularly when such activities tend to derive from a single religious tradition. And when it comes to wishing you a good holiday, I will not say “¡Feliz Navidad!” or “Bon Nadal!”

But I am happy to wish you “Bones festes!”

Segunda Pascua: the feast of Pentecost, 50 days after Easter Sunday, celebrating the descent of the Holy Spirit on the Apostles, the gift of tongues and the beginning of Church activity.

La Inmaculada: the feast celebrating the immaculate (without sin) conception of Mary, the mother of Jesus, in the womb of her mother, Anne. This doctrine was made into a dogma of the Roman Catholic Church by Pope Pius IX in 1854.

I’m a teacher living in Osona, Spain. I'm into tennis, dogs, and chickens. I’m also interested in translation and Moodle (well, digital tools for teaching, in general).
View all posts by Richard Samson →
This entry was posted in Anniversaries, Culture. Bookmark the permalink.