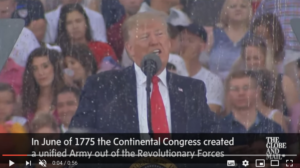 The start of July is noteworthy, among other things, for a cluster of national liberation anniversaries around the world:

This year’s 4th July events were made more memorable because of Donald Trump’s extraordinary ad-libbing during his presidential speech:

In June of 1775, the Continental Congress created a unified army out of the revolutionary forces encamped around Boston and New York, and named after the great George Washington, Commander-in-Chief.

The Continental Army suffered the bitter winter of Valley Forge, found glory across the waters of the Delaware, and seized victory from Cornwallis of Yorktown.

Our Army manned the air (inaudible), it rammed the ramparts.  It took over the airports.  It did everything it had to do.  And at Fort McHenry, under the rockets’ red glare, it had nothing but victory.  And when dawn came, their Star Spangled Banner waved defiant.  (Applause.)

The reference to 18th-century airports provoked much hilarity on social media, but in truth when it comes to Trump this kind of occurrence is nothing that we are not used to by now.

One aspect of Trump’s public image is his signature, which has been widely analysed by graphologists seeking insights into this man’s extraordinary personality. I’m no expert but I would say that this signature belongs to a person who is eager to impress, is rather a narcissist and probably suffers from insecurity.

Trump’s signature has become well-known because of his habit of showing off executive orders to the press, with his signature blazoned across a large area of the page. This particular Trump custom has given rise to a popular series of memes, and even apps for users to create their own. I used the Donald Draws app to create a meme for Tradiling readers below.

Play the video to see the meme!

One of the most celebrated presidential signatures is that of John Hancock, a leader of the American Revolution and the first man to sign the Declaration of Independence in 1776. His signature is so ornate and flamboyant that it stands out from all the others and in the USA has become a colloquial term for any signature.

So you might hear someone say, “Put your John Hancock here, please.”

Reference to something by referring to a part of it, in this case a single signature to refer to any signature, is a figure of speech known as synecdoche. In colloquial English there are many amusing examples involving names:

(Credit to the My English Class blog for collecting these and other examples of colloquial proper name synecdoche in English.)

Perhaps Trump will be immortalised in this way too, sooner rather than later.

I imagine hearing people say “Don’t be a Donald!” But what will it mean?

I’m a teacher living in Osona, Spain. I'm into tennis, dogs, and chickens. I’m also interested in translation and Moodle (well, digital tools for teaching, in general).
View all posts by Richard Samson →
This entry was posted in Anniversaries, English, Fun. Bookmark the permalink.