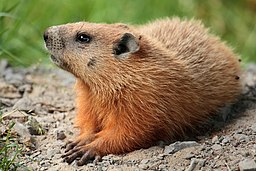 31 January saw the UK finally leave the EU, at least in principle, which some people feel is a kind of watershed event. 2 February was Groundhog Day, the day that people in North America study the behaviour of a hibernating rodent to predict whether winter will come to an end soon or not.

Groundhog Day has acquired new currency in English because of a 1993 comedy film of the same name, in which a weatherman gets stuck in a time loop and has to relive the same day over and over again. I haven’t seen the film, but I more or less know what the expression means:

But is the UK leaving the EU just another Groundhog Day? I wonder. Will things really be all that different? To start with, the friction between the EU and the UK is not going to go away. It is likely to increase over the coming months, and perhaps even years. Will this degenerate into a full-blown trade war?

Close to us in Spain, Gibraltar and the surrounding region are likely to be affected. The Spanish government will seek to press home its new-found foreign affairs advantage, this time with the support of 26 other member states lining up against the colonialism of an erstwhile partner, now just a “third country”. Where will this lead?

One aspect of Brexit that has received relatively little comment so far is the status of English within the European Union. The departure of the UK means that English is no longer the official language of any of the 27 member states. The two countries that come closest are probably Ireland and Malta, for which Gaelic and Maltese are the respective official EU languages. But English will continue, at least for the time being, to be the dominant language for all EU business, it seems. As such it has become, by accident, a lingua franca, a shared second language. Will that make English language dominance in Europe more acceptable, and less politically suspect, than before? Who knows?

As we English speakers say, in our customary accretive style, “Plus ça change!” It’s Groundhog Day!