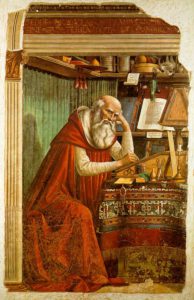 St. Jerome in his study. A painting by Domenico Ghirlandaio

Over here in Vic I got distracted by end-of-term tasks but now things are settling down again and I have just read about the milestone news from the United Nations, meeting in General Assembly on 24 May. Among other things, the UN has declared 30 September International Translation Day.

This day has been celebrated as Translation Day by the International Federation of Translators (FIT) since 1953. It is no coincidence that 30 September is the feast of Saint Jerome, the patron saint of translators. Jerome is credited with translating most of the Bible into a more modern Latin version in the late 4th century. His version, the Vulgate, was later made official by the Roman Catholic Church.

Official UN backing for the translation profession is a major milestone. This boost for the profession is long overdue and will help to bolster the prestige and recognition of our vital work. My opinion is widely shared, as shown by the comments below.

The European Commission and the wider European Union will be observing and celebrating the ITD for the first time in conjunction with European Day of Languages (EDL) following last year’s successful meeting between the Director-General for Translation (DGT) and Director General for Interpretation (DGI) and FIT President at the European Commission. The theme for #ITD2017 is Translation and Diversity. Let the International Translation Day be celebrated all around the world in 2017!
— International Federation of Translators

This resolution also enshrines and celebrates the importance and the irreplaceability of professional translation in international human endeavours. It highlights the critical need for training the next generation of professional translators, interpreters and terminologists to meet this ever increasing demand as international interaction, cooperation and collaboration continue to grow.
— ProZ translators’ community

I’m a teacher living in Osona, Spain. I'm into tennis, dogs, and chickens. I’m also interested in translation and Moodle (well, digital tools for teaching, in general).
View all posts by Richard Samson →
This entry was posted in Profession, Translation. Bookmark the permalink.