Juneteenth, a portmanteau word derived from “June nineteenth”, is the anniversary of the proclamation in Texas on 19 June 1865 that freed the last slaves in the USA at the close of the Civil War. Lincoln’s Emancipation Proclamation of 1863 had remained without effect in many parts of the South until the war was over.

Juneteenth has received prominence in the media this year because of the ongoing social unrest  following the filmed killing of George Floyd on 25 May at the hands of a police patrol in Minneapolis, and the re-emergence of the Black Lives Matter movement, which was launched in 2013 in response to the acquittal of George Zimmerman for the shooting of African-American teen Trayvon Martin the previous year.

The Black Lives Matter movement has met with opposition from those who fear a radical reform agenda and argue that systemic racism in the USA is on the decline, as evinced by  the falling number of young black men in prison and black deaths at the hands of the police. For these people, George Floyd’s tragic death is the exception, not the rule. Nonetheless, the differences in privilege between racial groups in the USA, in particular between blacks and whites, are still abysmal, whatever the underlying causes and direction of travel.

The confrontation between BLM protestors and their opponents has spread to the UK and other countries with large black communities made up of descendants of immigrants and slaves. On 7 June in Bristol, a city whose considerable wealth was largely based on the North Atlantic slave trade, Edward Colston’s statue was pulled down, rolled down the street and dumped into the river. Colston was an eminent 17th century merchant, widely admired as a philanthropist because of his many gifts to the city. But his largesse was founded on a trade of some 200,000 slaves, of whom some 20,000 died in transit and whose bodies were dumped at sea. 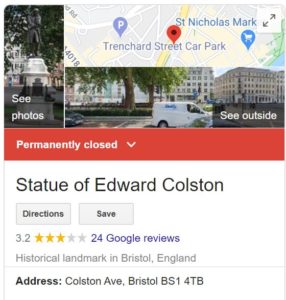 Google Maps reflects the new situation of the the Edward Colston statue, 7 June 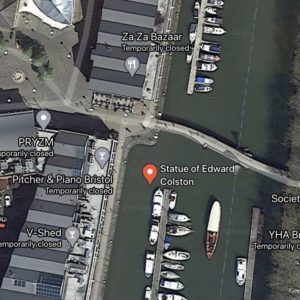 The statue is in the river.

This episode has rekindled the debate about the UK’s dark colonial past. Calls for the removal of the statue of Cecil Rhodes from the grounds of Oriel College, Oxford, have so far been resisted. Rhodes was a diehard 19th century British imperialist who sought to extend British rule throughout central and southern Africa.

There have even been calls for the removal of Winston Churchill’s statue from Westminster Square in London. Churchill, England’s most celebrated son, because of his political leadership during the Second World War, was a racist reactionary guilty of many atrocities throughout a long career: sending in troops to quell a miners’ strike in South Wales in 1911; sending over 150,000 British Empire soldiers to their deaths in the futile 1915 Gallipoli campaign in the First World War; engineering a famine that caused the death of millions of Bengalis in the Second World War; to name but three. Churchill’s statue is now boarded up to protect it from vandalism.

The whole question of righting the wrongs of history, of “historical guilt”, is fraught with difficulty. The past is full of shameful acts that we would doubtless condemn if they occurred today. Some say it is best to put these sad events to one side, and turn the page, so to speak. Yet not a year goes by without calls for official apologies for the past misdeeds of US and European imperialism, and economic reparations awarded to the descendants of those who were wronged and to the countries of Africa and elsewhere that were ransacked by white supremacists and their mercenaries.

When slavery was abolished in the United Kingdom in 1834, handsome compensation was paid to former slave owners, but freed slaves received nothing. Just this week Lloyds of London and Greene King, two large UK companies with roots in the slave trade, have announced their intention to make reparations, although the details and extent of these actions are still unclear.

Along with Juneteenth, the current unrest has led to renewed interest in a variety of expressions: defunding the police, antifa, All Lives Matter, Black Lives Matter, complicit, virtue signaling, reverse racism, martial law. Read more about them all at dictionary.com.

I’m a teacher living in Osona, Spain. I'm into tennis, dogs, and chickens. I’m also interested in translation and Moodle (well, digital tools for teaching, in general).
View all posts by Richard Samson →
This entry was posted in Anniversaries, Culture, Word reference. Bookmark the permalink.