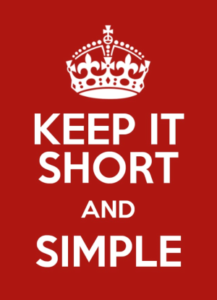 Adopting a simple style is considered a priority in other languages in the European Union too and consequently the EU Commission has published writing guides in this vein not only in English but in other languages such as Spanish.

In general, it seems easier to write plainly in English than in Spanish because the move to a more direct style has been around for longer, perhaps under the influence of straight-talking trans-Atlantic business. Initiatives such as the Plain English Campaign in the UK give public recognition to well-drafted texts, as well as calling out some of the worst transgressions. The United States has seen significant initiatives in the same vein since the 1970s and the US federal government runs a plain language website.

KISS intially stood for “Keep it Simple, Stupid” and in this form is usually attributed to Kelly Johnson, a Lockheed aircraft engineer. As such, KISS is a universal design principle, and is the latest in a series of broadly similar laws, aphorisms and guidelines, such as Occam’s razor, Mies van der Rohe’s “Less is more”, and Antoine de Saint Exupéry’s “Il semble que la perfection soit atteinte non quand il n’y a plus rien à ajouter, mais quand il n’y a plus rien à retrancher”.

The EU English writing guide mentioned above includes the following short test. Try it yourself.

Answer key at the foot of this article. 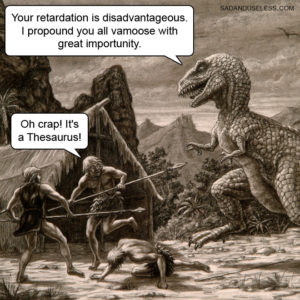 What are the characteristics of written texts and spoken texts? That is an interesting but rather unspecific and open-ended question. Certainly too complex for this brief article. Suffice it to say that there are various aspects of traditional Spanish / Catalan academic discourse that should be avoided, as far as possible, in a more modern, intelligible, direct style:

Recently, I carried out a simple analysis of a summary writing task with some university students writing in English as a foreign language. Sentence length was not expressly focused on in this task and students were free to adopt the style they considered most appropriate. It turned out that the best work and the worst work shared a common attribute: long sentences. Average sentence length for the top-graded submission was about 27 words. Average sentence length for the lowest-graded summary was about 37 words. In contrast, average sentence length in the model answer provided was just 17 words. Experience shows that many students and academics cannot rein in an impulse to showcase their accomplished compositional talents – whatever the European Commission might recommend!

We will have occasion to return to the topic of a clear KISS writing style in future Tradiling posts.