My life as an hermaphrodite

a / an hermaphrodite (Ngram)

I recently read a novel with this curious title.  You may be thinking, as I did, why “an hermaphrodite”? Why not “a hermaphrodite? These questions lead to a more general inquiry. When is an initial “h” pronounced in English? If you are curious, please read on.

Most often an initial “h” is pronounced but some words (with French etymology) have a silent “h”, as in the corresponding French word. Without an initial aspiration “h” sound, there are really very few such words in English:

Incidentally, there are a few words with a silent medial “h” too:

For most English words, however, the initial “h” sound is pronounced:

So far, so good. But when it comes to putting “a” or “an” before these words, there is some disagreement. Modern usage favours “a” when the “h” is pronounced and “an” when it is silent:

Some authorities, however, recommend “an” before sounded “h” when the first syllable is not tonic. Following this rule, we hear and read expressions such as these:

To my mind, these pronunciations and spellings are rather ridiculous, and I am confident that most native speakers would agree with me about this.

Nonetheless, “an historic” is holding out. It is not uncommon to hear BBC reporters speak of “an historic occasion”. Indeed, they seem to insist on it!

James Harbeck has studied the matter in some detail. He notes that

There is no shortage of people who will assert quite flatly that “an historic is actually the correct pronounciation” (Urban Dictionary 2004) and even counsel those who prefer a to “look it up” (Yahoo Answers U.K. & Ireland 2007) – ironically, given that current British and American usage manuals almost without exception either explicitly prefer a or at least allow it. Some speakers will aver that “it sounds better to say ‘an historic’” (Yahoo Answers 2006; see also Opinion L.A. 2007); some will simply say “there’s a case to be made that an is the suitable article before historic” (Opinion L.A. 2007). Many will use it because they are certain that it is correct or more formal; others will chose it because, being uncertain, they choose the more marked version on the assumption that it would not be used by others if it were not correct. As Bolinger (1975) quotes Ralph Long as saying (in a personal communication), there is a tendency among “people who really know little or no English grammar…, when in doubt between two constructions, [to] pick the less usual and presumably more elegant.”

Those on the other side of the issue declare an historic to be “pretty much a sherry-sipping, bowtie-wearing thing” (City Comforts 2006) or “pedantic, fussy, and patronising” (Yahoo Answers 2006), fume “I hate that ‘an’ preceding ‘historic’ … it seems awfully pretentious” (Opinion L.A. 2007), or simply flatly declare it wrong: “Do you live in an house? I didn’t think so. A historic” (Walsh 2006). Some usage guides allow either usage, but the trend among authorities appears to be in favour of a.

Harbeck comes to the conclusion that, among other things, the use of “an historic” in preference to “a historic” is a social marker, in particular, of a certain typically British formal elitism. No wonder the London newspaper The Times still recommends it in its in-house style guide. 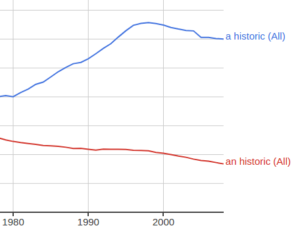 Tim North considers that “A historic is more common in both American and British English, but both usages are sufficiently common to be considered correct.” He uses Google’s Ngram Viewer to show how “an historic” is gradually losing ground. (Ngram Viewer is a collocation search engine that uses a huge Google database of books in English, Chinese (simplified), French, German, Hebrew, Italian, Russian, or Spanish.)

In my view, the use of “an” before “historic” is one of those linguistic pedantries that mark speakers out as true language prescriptivists!

I’m a teacher living in Osona, Spain. I'm into tennis, dogs, and chickens. I’m also interested in translation and Moodle (well, digital tools for teaching, in general).
View all posts by Richard Samson →
This entry was posted in English, Word reference. Bookmark the permalink.