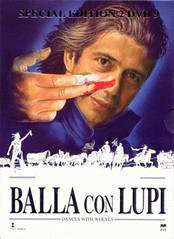 At the end of this month the Trafilm conference will take place in Barcelona. Coinciding with this event, I decided to write this film-related post.

I’m not the first, and I won’t be the last, to comment on the well-attested observation that translations tend to be less transgressive than original texts. Venuti considers this to be one aspect of a more general domestication strategy in translation, which other writers have referred to as normalisation. The focus is on standard syntax, intelligibility, avoidance of polysemy, elimination of obscurity; in short, a general flattening effect. These issues are discussed in depth in the three texts referenced at the foot of this text.

An example that springs to mind is the film “Dances with Wolves” (1990). A literal translation of the title might be “Baila con lobos”. (Not “Bailes con lobos”.) In the story “Dances with Wolves” is a translation of Šuŋgmánitu Tȟáŋka Ób Wačhí, the name the Lakota Sioux give to Dunbar, the protagonist. A finite verb without a subject is sometimes used as a proper name in the exotic tradition of English versions of American Indian names. In the film, there are other translations of Lakota Sioux names that follow the same pattern: “Stands with a Fist” (Napépȟeča Nážiŋ Wiŋ) and “Smiles a Lot”(Iȟá S’a).

Is there no tradition of “exotic” translation of American Indian names into Spanish? In the same film, the two characters mentioned above are called “Erguida con Puño” and “Risueño” in Spanish. Very flat translation!

Are there no resources in Spanish that could be similarly transgressive in a way that more closely matches the English title?  “Bailar con lobos” is hardly any different from the title chosen in Spanish, but what about “Bailara con lobos” or “Bailase con lobos”?

I’m no specialist in the field. It’s just a thought!

The “flattening” of film titles in translation into Spanish is a firmly established tradition. Consider these other recent examples, all of which in English are transgressive and ambiguous, in one way or another, while in Spanish they have been normalised and made more straightforward:

I would be interested to hear of other examples.

Venuti, L. (2008). The translator’s invisibility: A history of translation. Routledge.

I’m a teacher living in Osona, Spain. I'm into tennis, dogs, and chickens. I’m also interested in translation and Moodle (well, digital tools for teaching, in general).
View all posts by Richard Samson →
This entry was posted in Culture, Profession, Spanish, Translation. Bookmark the permalink.