So, what do you use machine translation for?

A legitimate question, I would argue, especially since Google first introduced its neural machine translation (NMT) system in 2016, thereby replacing statistical machine translation (SMT) as the leading paradigm for MT engines. Both SMT and NMT are data-driven approaches where translation is learned from massive amounts of data. But with NMT, the use of an artificial neural network improves the fluency and accuracy of the target language output. Errors reported in previous paradigms—particularly those deployed in the mid-1980s and the 1990s—have now been corrected to a large extent in the NMT paradigm.

With online translators like Google Translate, DeepL, Microsoft Translator and Baidu all using this approach, free-of-charge MT services are being employed for a wide variety of use cases by millions of people daily. Google Translate on Android alone “hit one billion installs from the Google Play Store in March 2021” (Pitman, 2021). The use of free MT in social media has been well documented since the technology became more accessible during the 1990s. Translation Studies, for its part, has a sizable body of research on MT and post-editing (PE) for translation and language learning.

That MT supports intercultural and interlingual communication with instant translations to understand and/or produce information across languages is, perhaps, not news. For what precise purposes and in what ways MT is being used in society at large remains, however,  more unknown. This may be why, on the 20th anniversary of Tradumàtica, the journal is publishing a special dossier that will include, amongst others, a summary paper by David Orrego-Carmona with participant views on the following question: “You are not a professional translator but you use machine translation on a regular basis. What do you use it for, for what purpose, in what way?” If by the time you read this post, you are still be able to answer (deadline: 17th October) please use this form to do so.

Meanwhile, below is a quick-and-dirty summary of what I discovered when I posed the very same question to two cohorts of general education students in their first year of undergraduate studies, who had enrolled in a course that I used to teach at the University of Auckland, titled Translation for Global Citizens. This course, offered to culturally and linguistically diverse (CALD) students from multiple disciplines, comprised a module on MT literacy which I was responsible for. To design module activities for a largely bilingual audience off I went, as one does, to design a short, informal, and anonymous Google Form survey, which I administered to students in both 2020 and 2021. I wanted to know about their areas of study, spoken languages and proficiency, reasons for enrolling in the course, frequency of free MT use and type of MT uses. The response rate was 85% (47 out of 55 students) in 2020 and 45% (27 out of 60 students) in 2021. The graphs below, which are based on aggregated data from the two cohorts (n = 74), show the frequencies of MT use and how these frequencies are distributed over students’ reported MT uses. 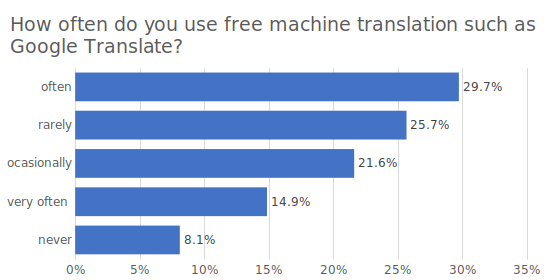 It turns out that two thirds of the respondents (66.2%) reported that they either occasionally, often, or very often used free online translators, while the remaining third (33.8%) claimed not to do so. Those who reported using MT more or less frequently did so mostly for language learning, followed by translating, writing, and completing coursework and assessment tasks, either often or occasionally.

Note that the frequencies in Figure 2 do not add up to our sample size of 74 students. This is because the MT use variable contains missing values, as respondents could skip this question. They could also answer “No” to the question posed in Figure 3. Yet those who claimed to use MT otherwise reported a range of applications (reproduced verbatim in Figure 3), including entertainment (gaming, reading and translating lyrics), communicating with CALD people and learning (curiosity, spell checking and content dissemination). 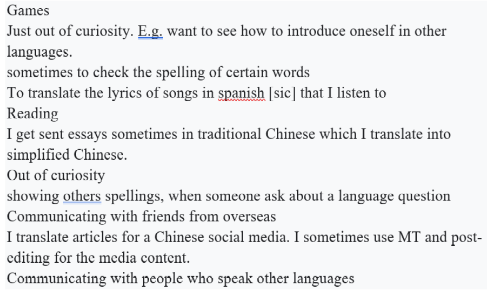 Figure 3. Screenshot of responses to the question ‘Do you use machine translation for anything else?’

If, like me, you want to have additional insight into how other values (such as field of study and language proficiency) may compare with MT uses and frequency of use—the interesting stuff, really—then watch this space! I’ll be querying and reporting patterns in the data in a separate post.

This entry was posted in Digital stuff, Translation. Bookmark the permalink.