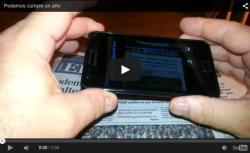 A few days ago Maria Perramon alerted us to the launch of new automatic translation services from Google and Microsoft (Skype) and speculated about their impact on the profession. If you read the blurb and look at some of the online videos (Google on YouTube and this BBC test) that have been published, the technology certainly looks powerful: rapid, easy to use, precise. Just point and click!

Nonetheless, this sounds too good to be true… and probably is!

To see for ourselves, we did some small-scale experiments with the new Google Translate application, which is an integration of the Word Lens augmented reality technology acquired some months ago. Google Translate now includes several technologies that can be daisy-chained together in various combinations:

As you can see in the video, the result here was:

Having a name in the text that is also a lexical word (Podemos) is an obvious problem for machine translation. We decided to give the system a second chance with another headline on the same page.

This time the result was:

On the basis of these two simple texts, we would have to conclude that the OCR is effective but slow and the machine translation is a hotch-potch of the good, the bad and the ugly!

Finally, we did a short experiment to check the latest sound recognition and voice synthesis functionality of Google Translate. Here the input is sound, rather than an image. We used the same headlines as above and in each case I made three attempts, trying to improve my pronuciation each time. To hear the tests, click on the play button.

On the basis of what we have seen here, Google Translate is truly amazing, but it’s practical use is still limited for some functions to just a handful of languages. The applications could be useful for tourists abroad trying to read signs in the street or in shop windows and product names in supermarkets. Also, perhaps, to have simple conversations with people that know how to speak slowly separating the words.

Alternatively, the VR functionality is a great pronunciation trainer, as you can hear in the recordings above! In that case, not much good at translation, but great for language learning.

I’m a teacher living in Osona, Spain. I'm into tennis, dogs, and chickens. I’m also interested in translation and Moodle (well, digital tools for teaching, in general).
View all posts by Richard Samson →
This entry was posted in Digital stuff, Profession. Bookmark the permalink.