What is the Oxford comma and should you use it?

The Oxford comma (also known as Harvard comma or serial comma) is a style of punctuation that involves separating the last two items in a list with a comma followed by “and”. The two styles, with and without the comma, are broadly speaking separated by an ocean. The style with a comma is generally preferred in the USA, while the style without a comma is favoured by the British. Except, that is, for the Oxford University Press in-house style. Hence the name.

Most British writers feel that this last comma in a list is unnecessary and, following the dictum “The less, the better” as far as punctuation is concerned, omit this final comma. So we have:

The problem is that, with or without the comma, depending on the items in the list, ambiguity could arise from the dependency relationships within the list. 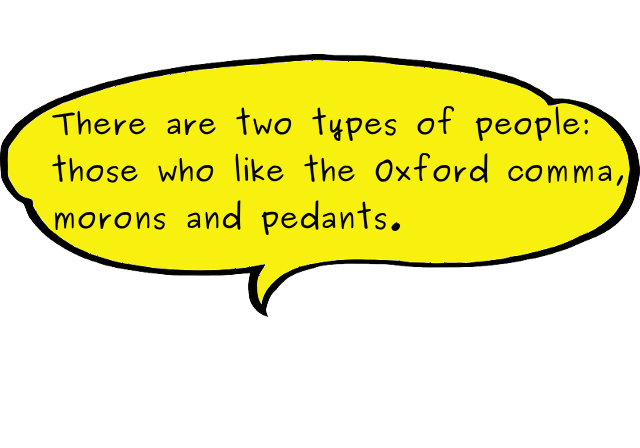 The possibilities for confusion are striking. For a fuller analysis and further examples (including a multi-million dollar court case decided by interpretation of the Oxford comma) see the handsome Wikipedia article on the serial comma.

It is worth noting that for short lists, for instance made up of three items, the pronunciation of the sentence read aloud usually removes any ambiguity. 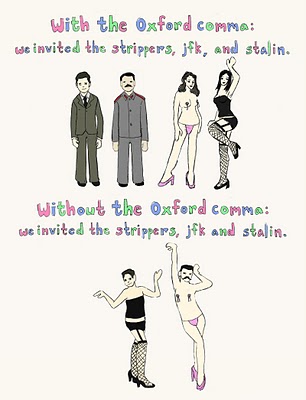 The Oxford comma has given rise to some great memes. The JFK – Stalin – strippers one on the right is my favourite (thanks, Ricardo).

Disagreements about the use of commas is one of the most frequent complaints of English mavens, who consider poor punctuation – and poor spelling – a symptom of the decline of civilisation. One of the most popular books on punctuation in recent years is Lynne Truss’s humorous Eats, Shoots and Leaves (2003), whose title plays on the different interpretations of the sentence fragment with and without the comma:

In English, the way you punctuate can say a lot about you: where you are from, how you were educated, your attention to detail, etc. What kind of Oxford comma user are you?

This entry was posted in English, Fun. Bookmark the permalink.