How do translators feel about Donald Trump? 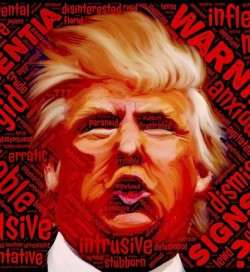 @POTUS has not yet issued any direct attacks on the translation community. But quite a few comments have appeared on the difficulty of interpreting Donald Trump. What he says is just such a mess that it is quite impossible to perform a satisfactory job.

Ofer Tirosh, and others, have commented on this notorious Trumpism about Ghazala Khan:

“His wife — if you look at his wife, she was standing there, she had nothing to say, she probably, maybe she wasn’t allowed to have anything to say, you tell me, but plenty of people have written that.”

This fragment combines unpredictable grammar with meandering innuendos, insults and vagueries. A nightmare for the interpreter.

But it is not just that. Another aspect of Trumpian rhetoric is its sheer agression. Traditionally, interpreters have often felt the need to tone down the wilder language of inflammatory public speakers. As Roderick Jones states in his manual Conference Interpreting Explained,

An interpreter’s role is mediation, after all, and you certainly wouldn’t want to fan the flames of hostility unnecessarily. So you might tend to err on the side of caution.

One incident involving Mrs Thatcher was when she reluctantly received a visit from a Marxist African president. Apparently, she said to him straight out, “I hate Communists!” The French interpreter bravely rendered it as something like “Prime Minister Thatcher says that she has never been wholly supportive of the ideas of Karl Marx.”

All of which means that Trump in Spanish, Catalan, or any other language probably comes across rather more low-key and less incoherent than in English.

I’m a teacher living in Osona, Spain. I'm into tennis, dogs, and chickens. I’m also interested in translation and Moodle (well, digital tools for teaching, in general).
View all posts by Richard Samson →
This entry was posted in Interpreting, Profession. Bookmark the permalink.