It’s the end of the year and as usual various authorities will be announcing their “word of the year”. In fact, it’s already started. One of the large English dictionaries, Merriam-Webster, has just announced its choice. They have gone for feminism. Merriam-Webster loosely base their choice on words that attract many searches on their website. The rise of feminism in this sense is associated with political events in the USA, in particular, the Women’s March in Washington DC (January), a rejection of feminism by Kellyanne Conway, a Trump spokeswomen (February), and the Harvey Weinstein scandal (October).

In November, Collins chose fake news as their Word of the Year 2017. Macquarie and Oxford selections have yet to be announced.

Meanwhile in other languages, a variety of self-appointed groups organise votes, panels of experts and committees to choose their own word of the year. In France, La Charité-sur-Loire has promoted itself as a town of books, following the model of Hay-on-Wye (Y Gelli) in Wales, and each year organises a Festival de Mot and their word of the year is chosen. In May 2017 renouveau was chosen, reflecting the climate of optimism surrounding the presidential elections.

In Germany, the Word of the Year 2017, just announced, is Jamaika-Aus. The reference to Jamaica is all about the colours of the flag and the failed negotiations to form a three-party coalition between the conservative CDU/CSU (black), the liberal FDP (yellow), and the Green Party (green).

Further afield, the Japanese celebrate Kanji of the Year. For 2017, it is 北, meaning north, and referring in this case to North Korean missile tests and heavy rain in northern Kyushu. 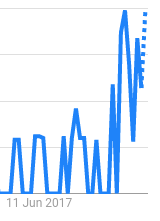 Recent searches for “escalf” at Google

Closer to home, what about words of the year in Spanish and Catalan?  The Fundación del Español Urgente has yet to announce its choice for 2017.

As for Catalan, the Institut d’Estudis Catalans opened an online vote on 3 December. Readers are invited to choose from a shortlist of 10 items.

My preference is not on the list: escalf (warmth, energy). An approximate measure of the popularity of this word is given in Google Trends. It’s taken off over the last month.

If you have any favourite words this year, please tell us about them.

Tradiling wishes escalf to all our readers over the coming days and the year ahead!

I’m a teacher living in Osona, Spain. I'm into tennis, dogs, and chickens. I’m also interested in translation and Moodle (well, digital tools for teaching, in general).
View all posts by Richard Samson →
This entry was posted in Fun, Word reference. Bookmark the permalink.