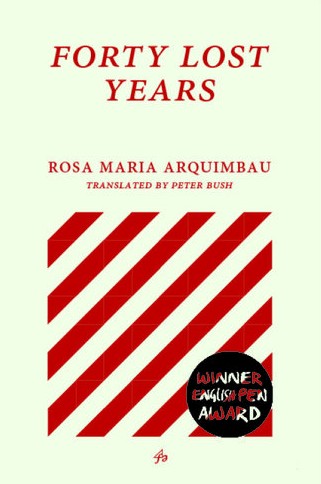 continues his output of translations of significant Catalan novels into English  with the translation of Quaranta anys perduts (Rosa Maria Arquimbau, 1971), which is published tomorrow by Fum d’Estampa.  From the publisher’s catalogue, we read:

Published for the first time in 1971, Forty Lost Years tells the captivating story of Laura Vidal, a working-class woman who becomes a high-fashion dressmaker to the bourgeois ladies of Barcelona during Franco’s dictatorship. Beginning in 1931, with the proclamation of the Republic, and ending in the 1970s, Rosa Maria Arquimbau’s masterpiece paints a vivid picture of forty years in Catalan history. Weaving the personal and the political, Forty Lost Years is a bitter tale that immerses readers into the frivolous atmosphere of a sexually liberal republican Barcelona, and the despair of a country defeated by the Fascists.

There is an open invitation to the book’s launch hosted by the UK All Party Parliamentary Group on Catalonia on Monday 19 July (reservation needed).  At Tradiling, we hope to publish a review of this work in the autumn.

I’m a teacher living in Osona, Spain. I'm into tennis, dogs, and chickens. I’m also interested in translation and Moodle (well, digital tools for teaching, in general).
View all posts by Richard Samson →
This entry was posted in Catalan, English, New books, Translation. Bookmark the permalink.