It would be remiss of us to let the pre-eminent moment of Donald J. Trump pass (presuming that it does pass) without a brief look back on some of the hair-pulling episodes of hilarity and frustration he has provided us with over the last four years.

Only last week I read a report about the difficulty of interpreting Mr Trump, particularly for Japanese interpreters. Mr Trump is just too angry and rude to render into Japanese, a cultural context in which emotional outbursts in formal contexts are taboo. It is hard to imagine from a western point of view the severity of the dissonance involved.

I have been looking back over some of the Trumpslation stories of recent years. Here is a selection from three years ago, when there was still general astonishment at Mr Trump’s presidential vernacular:

I am sometimes asked, What should you do as an interpreter when speakers do not observe due decorum? There is no one-size-fits-all solution but I can give examples of such behaviour from my own experience. In one instance, I was interpreting at a sales convention and one of the representatives asked if the supplier could offer special discounts beyond what had already been set out. The supplier, speaking in Spanish, made a remark that went something like “Pues, si no me hacéis bajar los pantalones y enjabonarme…”, resorting to a traditional Iberian figure of speech. All present knew that a joke had been made because the Spanish delegates started laughing. But those listening to my interpretation were waiting for me to tell them what was so funny.

I could not think of any viable translation on the spot so I moved into the third person and said something like “The speaker has a made rude sexual joke about humiliation”. That was the best I could do at the time. Looking back now, it seems to me that it was sufficient.

This anecdote is an example of the softening that is frequently attested to by interpreters. To avoid overstepping the mark, looking foolish, or worse, interpreters tend to smooth out the wrinkles in the original speech and seek to create a climate of understanding.1 If the speaker is aggressive, the interpreter will soon find themselves between a rock and a hard place. Should you go with the speaker, creating a climate of tension, and risk taking the blame for a breakdown in communication? Or should you soften the blows, rendering insulting intentions in an empathetic tone?

In my view, caution is the better part of valour. 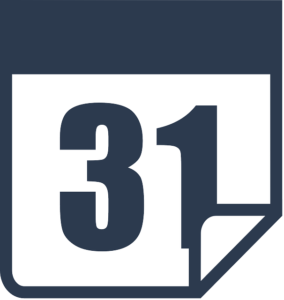 The pandemic has had many tragic consequences but it has also led to some successful innovation. One significant change has been the reorganisation of  meetings, focus groups, seminars and conferences. Few wanted to go online but needs must, as they say. In this new context, many group activities have had to be reconvened online or they would have had to be cancelled.

There is loss involved in this process. Most of us miss the warmth of human contact, the excursions and trips, the social side of events, the opportunity for impromptu exchanges. But there are also advantages: no need for travel, no need to pack, no need for hotels, no need to use foreign machines and strange wi-fi networks, no need to spend, etc.

Because online events are much cheaper to organise there has also been an increase in the number of open, free or really cheap activities that anybody can sign up for. The translation and language sector is no different in this regard and at Tradiling we are happy to publicise any events that could be of interest to our readers.

One organisation that has taken a step forward in the translation field is Multilingual magazine. They have been holding a series of online panel discussions of great interest since August. Go to their web site to see recordings of past sessions and sign up.

The final webinar in the current season is scheduled for 5th November:

“It’s important to understand we all have conscious and unconscious biases. This discussion will delve into the female gender bias with an all-male panel. We can only learn about ourselves and seek improvement when we can see different perspectives from different people and different cultures.”

Congratulations to Multilingual on a great initiative, which we hope will be continued.

And to all Tradiling readers we have the following request. If you know of other open online translation and language events, please tell us about them and we will be happy to post details here.

Recently Merriam-Webster came under pressure from an online campaign to change one of the example sentences in their online dictionary of English. After a short period of time the dictionary editors caved in and suppressed the disputed example (as reported by Jewish Journal and elsewhere).

Somewhat inexplicably, according to “Merriam-Webster correspondence coordinator Carolyn Polis  [… ] the example slipped in as part of an automated program.” In my view, the fact that Merriam-Webster automate their selection of examples would seem to be the best guarantee of impartiality.

The word in question was apartheid.

The entry in dispute, now suppressed, is shown below: 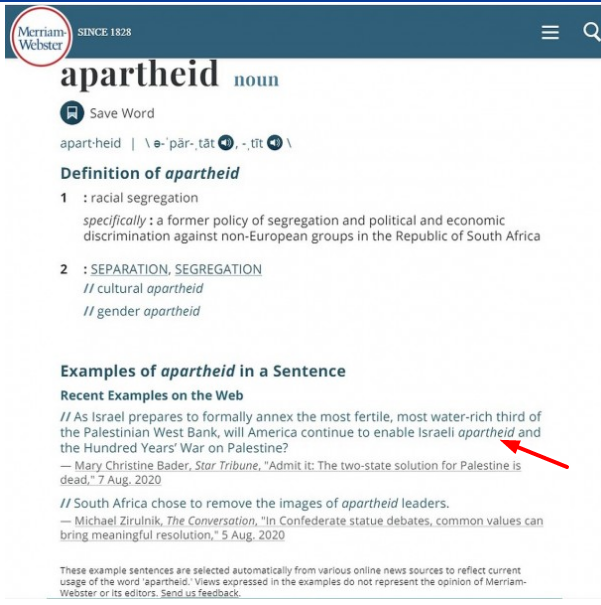 As is stated on the same page, “example sentences are selected automatically” and “do not represent the opinion of Merriam-Webster or its editors”. This assurance of evenhandedness was not enough for those who abhor any public criticism of Israeli policy, even when cited merely as an example of language use.

The corresponding dictionary entry at the beginning of October makes no mention of Israel, though it does mention “the racial apartheid of the South” of the USA during the 20th century. This new example is presumably unproblematic for the pro-Israeli policy lobby but risks offending other groups of people, such as Confederacy nostalgics. 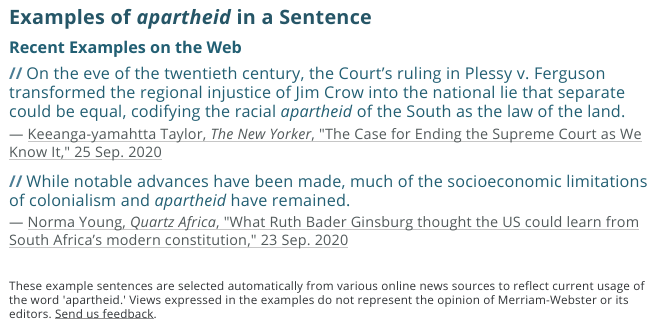 According to the dictionary’s own proposed definitions of apartheid (racial segregation, separation, segregation) all and any of the above examples are appropriate, it seems to me. So why would the dictionary editors remove an example solely on the grounds of the offence taken by a group of readers? In the last analysis there is no way to avoid offending people. Or, to put it another way, if you ever say anything worth saying about human society, you are bound to offend somebody.

Looking at this issue from the lobbyists ‘ point of view, why take such an interest in a dictionary entry? Undoubtedly, their intention is to censor the dictionary and to “limit the spectrum of acceptable opinion”.

As Chomsky put it,

The smart way to keep people passive and obedient is to
strictly limit the spectrum of acceptable opinion, but allow
very lively debate within that spectrum – even encourage the
more critical and dissident views. That gives people the sense
that there’s free thinking going on, while all the time the
presuppositions of the system are being reinforced by the
limits put on the range of the debate.”

In the lobbyists’ view, the collocation “Israeli apartheid” should be eliminated from public discourse, and in consequence perhaps the concept become an “unacceptable opinion”. Well, they have their work cut out because this expression is very widely used indeed, as a simple web search reveals.

All in all, if the above example is anything to go by, lexicography may be entering a post-descriptive phase. Before corpus linguistics became dominant in the 1980s and was used to compile more objective works, such as the COBUILD Dictionary of English, which was based on the Bank of English corpus of some 650 million words, dictionaries were notoriously lop-sided affairs, all too often recommending or suppressing uses that reflected little more than the prejudices of the editorial team.

Since then descriptive corpus-based lexicogaphy has led to major improvements in the quality of reference works, not only in English but in all natural languages. Any attempt to send dictionaries back to the dark ages of arbitrary prescription – at least in academy-free English – should be resisted, alongwith any drive to make dictionaries “politically correct”.

Meanwhile as users of dictionaries we need to remain alert and ungullible. With this in mind, I have posted a copy of this article to the Merriam-Webster editorial team. We need to push back on this kind of nonsense.

Can Tradiling readers contribute their own examples of overt manipulation of reference works? 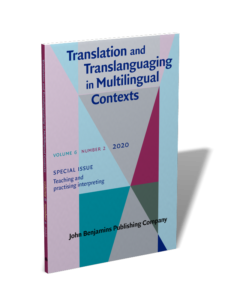 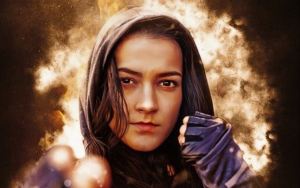